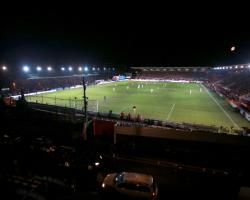 City's official Twitter feed reported that the game had been stopped because of a fire drill, before adding that smoke had been seen coming from the back of the Stagecoach Stand.

The Grecians posted a picture on their Instagram account showing fans from that stand taking refuge on the field while the incident was addressed.

City were leading 1-0 when the game was suspended nine minutes in, Jayden Stockley with the early goal.

Carlisle's official Twitter account posted a video of fans congregating on the field, adding the fire engines had arrived on the scene.

Carlisle continued to post updates on their Twitter account, adding a picture of a firefighter in the stand but adding: "Exeter are hopeful of getting the game restarted soon."