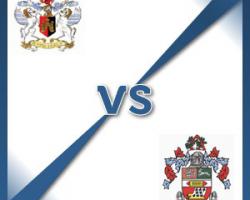 Exeter V Accrington Stanley - view commentary, squad, and statistics of the game live.Grimes set to miss out for ExeterExeter are set to begin life without Matt Grimes when they host Accrington.The 19-year-old playmaker is likely to have completed his club-record sale to Barclays Premier League outfit Swansea by the time his boyhood club kick-off their League Two clash against Stanley.And boss Paul Tisdale hopes to beat the clock to name David Noble in his starting line-up

After a successful loan spell, Noble has agreed a permanent deal but the Grecians need to register the former Oldham man with the Football League when the transfer window reopens.City have no fresh injury worries as they look to extend their unbeaten home run to seven matches and complete the double over Stanley.Accrington are unable to utilise new signing Seamus Conneely.The versatile 26-year-old signed on Thursday but needs clearance before he can make his Stanley bow.On-loan goalkeeper Jack Rose (hip) is still not quite ready to return so Luke Simpson will continue between the sticks.Full-back Adam Buxton (thigh) remains Accrington's only long-term absentee, but he is back in training