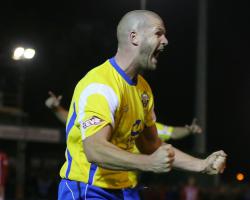 Exeter V Burton Albion - view commentary, squad, and statistics of the game live.Bennett boost for GreciansExeter will be boosted by the return of captain Scot Bennett when they host Burton.Skipper Bennett missed the Grecians' 3-2 home win over Shrewsbury with an ankle injury and then the trip to Accrington last Friday due to the birth of his daughter but he will return to Paul Tisdale's squad to tackle the Brewers.And the Exeter manager has plenty of options, with only long-term absentees Pat Baldwin, Jamie Reid and Jordan Moore-Taylor sidelined.Ryan Harley and Alex Nicholls are likely to feature on home soil for the first time since returning to the club while Clinton Morrison could make his Grecians bow from the bench.On-loan Blackburn midfielder Darragh Lenihan will return to the Burton squad.Lenihan made his first senior start in Jimmy Floyd Hasselbaink's first game as Brewers boss against Wycombe on November 17 and drew praise for his performance

The Republic of Ireland Under-21 international then missed the win over Luton and the 1-0 defeat at Shrewsbury with a groin problem.The 20-year-old's return gives Hasselbaink a selection dilemma, with Robbie Weir impressing in the holding midfield role on his return to the team in Lenihan's absence.Centre-half Ian Sharps (foot) could also be back in contention after training with the rest of the squad this week but Hasselbaink, whose side will move level on points with league leaders Wycombe if they win in Devon, will wait until Friday to decide whether to play his captain