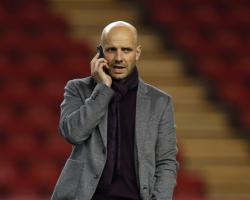 Boden planted a free header past Exeter goalkeeper Bobby Olejnik to cancel out Jordan Tillson's opener, but it was no more than Newport deserved as they were the better side on the day.

"It was a really difficult day to play football on and we didn't play as well as I would have hoped," Tisdale said

"It was difficult conditions, but I still would have hoped for more.

"We have got a point and I am grateful for that because it was in the balance I suppose.

The conditions were really difficult in terms of the surface and we were complicating it.

It is not a difficult theme really, we needed to be higher up the pitch and put more pressure on the opposition.

They used them pretty well and I have very few complaints about the second half because they were such difficult conditions.

"But in the first quarter of the game, we just did not use those conditions as well as they did

We just did not make the right choices."

Opposition manager Warren Feeney felt Newport deserved more from the game, especially after striker Conor Wilkinson had hit the post twice in the first half.

"I am disappointed we didn't win the game, I thought we had the better chances," he said

"To come here and hit the post twice and to get beaten by a set-piece, I think we did really well.

But I am not one who looks into the opposition a lot, I like to worry about what we have got and I have got the personnel to change it around and we did that.

A team like Exeter have got quality players, where one ball can hurt you.

I said to (Scott) Boden last week, he was a bit down and he missed one in the first half and ended up getting the winner.

It keeps his run going, I don't like singling out individuals, it is about the team."